To share your memory on the wall of Ruth Henderson/Keyes, sign in using one of the following options:

Provide comfort for the family of Ruth Henderson/Keyes with a meaningful gesture of sympathy.

Ruth moved to Brockville in 1951 with her first husband, deceased John Edward Henderson, from Toronto, shortly after his graduation from Osgoode Law School. They took up residence in Brockville and had three children together, Sherry, David and Sandra. Ruth is predeceased by her youngest daughter Sandra and her second husband Albert Keyes.

Ruth was a fun-loving and out-going woman who loved people and had a positive attitude towards life. She loved downhill skiing, which she did for many, many years, she loved horseback riding, which she did with her first husband, deceased John Henderson. She also enjoyed playing tennis, boating, swimming, yoga and travelling. She was also an animal lover and took care of the animals in her life. Ruth had an open mind to change, adventure and trying out new activities. During her life she helped and supported many people in a variety of ways. She had sympathy and compassion for people and animals in need. People close to her were well aware of this trait.

She is survived by her son David and his wife Gail, David’s two children Ashley and Christopher also her great grandchildren and her daughter Sherry and her partner Bernard.

There will be no memorial for Ruth only a private family gathering with arrangements entrusted to Irvine Funeral Home and Chapel, 4 James St. E., Brockville. In memory of Ruth, donations to the Alzheimer Society of Lanark, Leeds and Grenville will be gratefully appreciated. Send a condolence or share a story on the "memory wall" tab above or place a donation at https://alzheimer.ca/en/lanark .
Read Less

Receive notifications about information and event scheduling for Ruth

We encourage you to share your most beloved memories of Ruth here, so that the family and other loved ones can always see it. You can upload cherished photographs, or share your favorite stories, and can even comment on those shared by others.

Posted Jul 27, 2019 at 01:39pm
Ruth had requested that this poem be shared with her obituary. This poem conveys Ruth’s feelings about death and dying.

Submitted by her children, David and Sherry 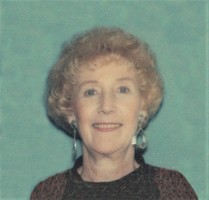