To share your memory on the wall of Wendy Pantony, sign in using one of the following options:

Provide comfort for the family of Wendy Pantony with a meaningful gesture of sympathy.

Wendy was born in Durham, England in 1931. From a young age, she had a sharp intellect, a love for books, and excelled in school. She married at 19 and was the cherished wife of ... Read More
PANTONY, Wendy
Entered into rest on December 9, 2019

Wendy was born in Durham, England in 1931. From a young age, she had a sharp intellect, a love for books, and excelled in school. She married at 19 and was the cherished wife of John Pantony for 62 years. After the birth of their two sons, she and John moved to Canada and lived in Kingston, then Whitby where their daughter was born. They then moved to Montreal and finally, Brockville, where Wendy was so taken with the beautiful St. Lawrence River they decided to settle down.

Wendy was a supportive, curious, open, and grounded mother and grandmother-a powerful family matriarch whose love lives on in all of her offspring. She is survived by her sister Shirley Rolland of Victoria, her children Philip and Andrée of Brockville, Rod and Angela of Edmonton, and Kaye-Lee of Kingston, who have given her eight grandchildren: Derek, Josh, Colin, Katrina, Brianne, Sage, Ben, and Bodhi, as well as eight great-grandchildren, with one more on the way.

Wendy spent her working years as a librarian, legal secretary, troubleshooter at a psychiatric ward, and Brockville Helpline founder. Into retirement, she pursued what she loved and what drew her curiosity, such as painting, writing poetry, reading, playing tennis, setting fashion trends, swimming, travelling, playing bridge, and exploring art galleries.

With fearlessness and dedication, Wendy and John built a beautiful and enriching life for themselves and their family. A few days before she passed on to be with John again, Wendy told one of her grandchildren that she had done everything in her life she’d ever wanted to do and had no regrets.

A celebration of Wendy’s life for family and friends will take place Saturday, March 28, 2020 at 46 Country Club Place in Brockville at 2 PM.

Expressions of sympathy donations to the Brockville Public Library, where Wendy was an avid patron, will be gratefully acknowledged. Condolences and donations may be placed online at www.irvinememorial.com.
Read Less

Donations are being accepted for: BROCKVILLE PUBLIC LIBRARY.

We encourage you to share your most beloved memories of Wendy here, so that the family and other loved ones can always see it. You can upload cherished photographs, or share your favorite stories, and can even comment on those shared by others.

Posted Dec 30, 2019 at 12:25am
I only knew Wendy for 1 1/2 years. I recognized early on that this was one feisty and determined woman and she was intelligent beyond her years. I brought her out to my remote cottage on the Mississippi River in 2018 which was no small feat. It involved a trek on a rough trail about 1 1/2 miles long through dense forest. The trail was suited more for creatures of the forest or off road 4 x 4 ATVs. Wendy was up for the task without hesitation. She donned her helmet and between her and her daughter Kaye-lee held on for dear life. It was not a smooth ride. When she arrived she wanted me to show her the tree fort that she had heard about. Turns out just showing her was not enough. The first thing she said was "I'd like to climb up there and check out the view". And so she did at the spry age of 87 she climbed to the top of the tree fort to lookout onto the river below. That was just the type of woman she was. Her determination and strength of character have been an inspiration for everyone who followed her. Bob Fairchild
Comment Share
Share via: 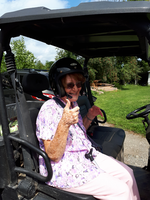