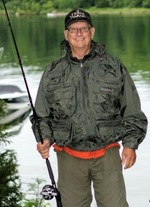 Passed away peacefully with his family by his side at the Brockville General Hospital on February 13, 2019. Ted LaBrash, at the age of 77 yrs. Beloved husband of Bev (nee Gibbs) and dear father of Jeffrey LaBrash (Viola) and Janet LaBrash (Raffaele DiGirolamo). Fondly remembered by his grandchildren Matthew and Katie LaBrash and Jacob and John DiGirolamo. Brother of Paul (Jean), Roger (Dale), Peter (Anne) LaBrash and Jeannie (Ivan) Coleman. Predeceased by his two sisters Mary Lou Aubrey and Margaret Cuthbert as well as by his parents Clara and Emery LaBrash.

Family and friends are invited to pay their respects at Irvine Funeral Home and Chapel, 4 James Street East, Brockville on Tuesday, February 19th from 10 am until 12 noon when a celebration of Ted's life will be held in the chapel. As expressions of sympathy, donations to the Salvation Army will be gratefully acknowledged. Send condolences or make a donation online at www.irvinememorial.com.