To share your memory on the wall of Steve Humphry, sign in using one of the following options:

Born September 16, 1957, Steve attended Thousand Islands Secondary School in Brockville and Loyalist College in Belleville. He was a Class "A" mechanic and an eclectic collector of Ford memorabilia and cars. Steve enjoyed working out at the YMCA, Car Shows, and camping time spent with family and friends.

In keeping with Steve’s wishes, there will be no traditional visitation. A Celebration of Life will be held at the Royal Canadian Legion Branch 96, 180 Park St., Brockville, Ontario on Monday, March 18, 2019 from 6:30 -9 p.m. in the lower lounge. A funeral service will take place on Saturday, March 23, 2019 at Mount Pleasant United Church, 1050 Hoards Rd., Stirling, Ontario at 1:30 p.m. followed by a celebration with family and friends. Arrangements are entrusted to Irvine Funeral Home, 4 James St. E., Brockville. As expressions of sympathy, memorial donations to the Heart and Stroke Foundation or charity of your choice would be appreciated by the family. Condolences or donations can be made online at www.irvinememorial.com.
Read Less

Receive notifications about information and event scheduling for Steve

We encourage you to share your most beloved memories of Steve here, so that the family and other loved ones can always see it. You can upload cherished photographs, or share your favorite stories, and can even comment on those shared by others.

Christine, Love Sharon Doupe (nee Humphry) & Family, and other have sent flowers to the family of Steve Humphry.
Show you care by sending flowers

Guaranteed hand delivery by a local florist
AS

From a young age it became his passion, not just the tinkering/fixing of them, but the look, the textures of the interiors, the modifications that could be done to them, and the restorations that enthralled him. I remember us kids getting to go to the races with our Grandpa Empey at the race car track out by Tincap and Steve being just enthralled with everything, the noise, the energy and of course the crashes, lol. Soon enough, he and my Grandpa would make their way into the pit area to look and talk with the drivers and their teams, while of course I just rolled my eyes at them, lol. I don't recall how old Steve was when he heard about some big shot getting buried in his car, and yep, he thought that was just so cool, he started telling everyone that HE wanted to be buried in a car (at the time he was in love with the Torino Dad had and that's the one he wanted), so when Linda told me of her idea for Steve's ashes, I think it is perfect!!! :)

Steve also loved hunting and fishing. As a teen, Steve got his first real bow and arrow set. Off we would go to the sand pits and set up targets on the hills for him to practice. He was actually very good at it, and he even took the time to teach me. He also used the sand pits for his BB gun and his first real rifle practicing. It wasn't that surprising then, that Steve ended up joining the Brockville Army Cadets as a teen :) Later on in years, both Steve and Glenn would join Dad to go deer and moose hunting and were usually successful. As far as fishing went, if there was any chance of being out on the water or even just on the dock to fish, Steve was there.

In high school, Steve was part of the wrestling team, and actually did quite well doing tournaments. He enjoyed the comradery of his fellow team mates and of course, the competitional aspect, always wanting to be the best at everything ;) Steve also took an interest in TV broadcasting and film making that was offered after school. Adrian Light and Brian Finch were also in those classes and were Steve's friends, so I called them the three amigos.

I have many memories of Steve, some make me laugh, others make me cry, but mostly they make me smile to remember them and him, and I hope they do for you too.

As kids at home, Steve's nickname was CD and mine was Hairbear growing up. Being into cars also meant using the "CB" radio and proper signoff language.....so to my Big Bro (how he always signed his emails to me) I say , "Hairbear to CD out"
Comment Share
Share via:
C

Posted Mar 18, 2019 at 10:16am
Linda and Family, we are thinking of you during this difficult time. March of Dimes Staff and Consumers

Flowers were purchased for the family of Steve Humphry. Send Flowers 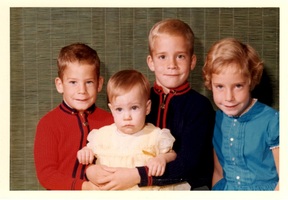