To share your memory on the wall of Robert (Bob) Barbour, sign in using one of the following options:

Entered into rest peacefully at the Brockville General Hospital on Friday April 9, 2021, at the age of 89 years

Bob was a longtime Insurance Adjuster/Broker and Real Estate Broker in the City of Brockville. U... Read More
~~~~~~~~~~~~~~

Entered into rest peacefully at the Brockville General Hospital on Friday April 9, 2021, at the age of 89 years

Bob was a longtime Insurance Adjuster/Broker and Real Estate Broker in the City of Brockville. Upon graduating from BCI where he played football, Bob joined the Brockville Police Services. After four years of service, he attended University of New Brunswick, later to return to Brockville as an Insurance Adjuster. In 1980 Bob opened R.I. Barbour Real Estate Ltd. with his wife Joan.

Robert was very community minded and served on several boards including the airport commission. He joined the Brockville Thousand Islands Rotary Club in 1980 and the Paul Harris Award was bestowed upon him in 2006. Bob was loved and will be sorely missed by his family, friends, colleagues and community.


Due to Covid 19 restrictions a celebration of Bob's life will be held at a later date.

As expressions of sympathy, donations to the Thousand Islands Rotary Club will be gratefully acknowledged.

Send a message of condolence or share a special thought of Bob on the Memory Wall above. Thank you.
Read Less

Receive notifications about information and event scheduling for Robert (Bob)

Donations are being accepted for: ROTARY CLUB OF BROCKVILLE ONTARIO INCORPORATED CHARITABLE TRUST.

We encourage you to share your most beloved memories of Robert (Bob) here, so that the family and other loved ones can always see it. You can upload cherished photographs, or share your favorite stories, and can even comment on those shared by others.

Posted Apr 20, 2021 at 03:35pm
So very sad at the passing of Bob Barbour. Rob and I are recent friends of Bob and Joans, we very much enjoyed getting together with them for coffee. I could have listened to Bobs stories for hours. Such nice people and Bob will be surely missed by so, so many
Comment Share
Share via:
CW

Posted Apr 19, 2021 at 10:07pm
My condolences to Joan and the family. Bob was a great inspiration to me and my mentor as I started my career in Real Estate. Bob was always happy to pass on his knowledge and share his experiences with me. I loved just sitting with him over a hotdog and fries listening to his stories of the past. My heart breaks. Rest in peace my friend. You will not be forgotten. 😢
Comment Share
Share via:
JH

Posted Apr 19, 2021 at 09:46pm
Joan, I,m so sorry to hear about Bob,s passing. My prayers are with you. He was such a nice person and will be missed greatly.
Comment Share
Share via:
EC

Posted Apr 16, 2021 at 03:09pm
Dear Joan,
We were very sorry to learn of Bob's passing and would like to express our heartfelt condolences to you and your family. We first met Bob almost 22 years ago now, when he sold us our home here in Brockville. Even upon first meeting, Bob's sterling qualities shone through - his integrity, kindness and true decency. He will be sorely missed. As the saying goes: the beauty of a life well-lived never dies; it continues to embrace and inspire us. 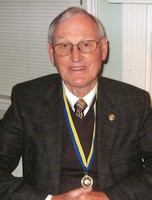