To share your memory on the wall of Peter Acres, sign in using one of the following options:

It is with sadness and gratitude, of a life well lived that the Acres family announce Peter’s passing at the age of 98. Peter is predeceased by his wife Irene of 65 years . Peter is survived by his children Richard M. ... Read More
~~~~~~~~~~~~~

It is with sadness and gratitude, of a life well lived that the Acres family announce Peter’s passing at the age of 98. Peter is predeceased by his wife Irene of 65 years . Peter is survived by his children Richard M. Acres, wife Amy, of Denver Colorado. Karen Acres of St. Lazare Quebec. Missed by grandchildren Kaylee, Lauren, Justine, and Cameron.

Peter was born in Cheshire England. At the age of 21 he served as captain in the British army corps of engineers, supporting the seventh armoured division the Desert Rats from 1942 to 1946. Landing in Normandy on D-Day, his division built, and destroyed bridges across Europe as the allies advanced. After the war he married his wife Irene, and moved to Montreal. Peter successfully established P. M. Acres architects, designing for multinational corporation‘s all over the world. Leaving a legacy by designing two pavilions for expo 67 world fair, and numerous churches and industrial complexes. During those years Peter and Irene raised their two children in Hudson Quebec. They were active participants in the community, developing and Co-owning Mont Rigaud Ski Centre , and the Hudson Shopping Center. With his passion for golf he also designed the clubhouse at Whitlock, and served as president at one time.

Peter lived a full life, and has now joined his lovely wife Irene, where he will now rest in peace for eternity. We would like to extend our thanks and deepest appreciation to Jenifer and all the nursing and support staff at the Royal Brock retirement home, where he resided for the last few years, having spent 20 years at Country Club Place with Irene in Brockville, Ontario.

Send condolences or share a special thought of Peter on the Memory Wall above. Thank you.
Read Less

Receive notifications about information and event scheduling for Peter

We encourage you to share your most beloved memories of Peter here, so that the family and other loved ones can always see it. You can upload cherished photographs, or share your favorite stories, and can even comment on those shared by others.

Posted May 25, 2021 at 02:16pm
TO THE FAMILY OF PETER ACRES, I OFFER YOU MY SINCERE CONDOLENCES ON THE DEATH OF YOUR FATHER. WHAT A FULLY ACCOMPISHED LIFE HE LIVED. ONE WOULD NEVER KNOW ABOUT HIS SUCCESSES, AS A TRUE ENGLISHMAN HE WAS NOT AT ALL BOASTFUL (I MAYBE A BIT BIASED, AS MY LATE HUSBAND, TIM WAS ALSO ENGLISH). HE WAS ALWAYS THE PERFECT GENTLEMAN, BUT VERY STRONG IN HIS BELIEFS. HE HAS GONE TO JOIN HIS BELOVED WIFE, IRENE WHO HAD A DELIGHTFUL SENSE OF HUMOUR.
I WAS A NEIGHBOUR FOR 20 YEARS AT C.C.P. I DELIVERED FLOWERS EVERY TIME I VISITED & ALWAYS HAD A FONDNESS FOR THEM. MAY GOD REST THEIR SOULS,
SINCERELY,
MARGOT GREEN
Comment Share
Share via:

Posted May 16, 2021 at 02:02am
As a good friend Karen, I wish to offer my sincere condolences to you and your family. I only met your dad on a couple of occasions and this was many years ago both in Hudson and Brockville. You actually were not present when I did but I found your father quite charming. He made some interesting and insightful and somewhat humorous comments on the state of the world at each of these times. And I can see by what you had written on this sad occasion that he had quite a remarkable life of which you can be proud.

Posted May 14, 2021 at 01:59pm
Dear Peter, your English charm and sharp wit were not lost on those of us lucky enough to have known you. I will miss our chats, your smile, and the understanding we shared on English oddities. RIP my friend. xx Jenifer
Comment Share
Share via:

Posted May 12, 2021 at 06:51pm
Sincere and deep condolences to the family and friends of Peter. I had the pleasure of meeting Peter through business dealings. A gentleman through and through. He always spoke of his family with great affection. Rest in Peace Peter.
Comment Share
Share via: 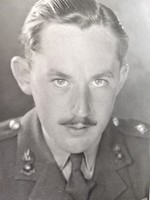