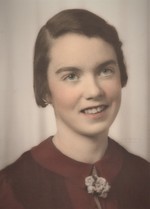 Passed away peacefully at the Sherwood Park Manor on Thursday, October 17, 2019. Patricia Kennedy, at the age of 93 years. Daughter of the late Loretta (Flood) and William Kennedy. Dear aunt of Jo-Anne Donovan (Bernard) and William Kennedy (Denise). Also survived by a number of nieces and nephews.Patricia was predeceased by her two brothers Patrick and Cornelius Kennedy. The family would like to thank all the nursing staff, doctor's and care givers at the Sherwood Park Manor for the excellent care they gave to Patricia.


Family and friends are invited to pay their respects at Irvine Funeral Home and Chapel, 4 James Street East, Brockville on Tuesday, October 22nd from 12:30 until 1:30pm when services will be held in the Chapel. Interment will follow at the St. Brendan's Catholic Cemetery, Rockport, ON. As expressions of sympathy, donations to the Alzheimer Society of Lanark, Leeds and Grenville be gratefully acknowledged. Send condolences or make a donation online at www.irvinememorial.com.