To share your memory on the wall of Miriam Rick, sign in using one of the following options:

Provide comfort for the family of Miriam Rick with a meaningful gesture of sympathy.

Meum was the eldest daughter of Dorothy and Robert Allen Carmichael of Westmount, PQ. Following Robert’s death while Meum was young, Dorothy moved the family to Danville where Meum met Bill. After attending Stanstead College, Meum married Bill and they began a series of moves to Pointe Claire and Quebec City with the ever-growing family before settling back in Danville. Meum and Bill were true partners in every sense as Bill furthered his career and then established HP Power Drives in Montreal with his friends George Tratt and John Griffin. In addition to acting as the family traffic cop, Meum somehow found the time to teach part-time, earn her BA in English / Philosophy and become heavily involved with the Girl Guides of Canada as Quebec Commissioner as well as other charities.

The 1960-80s were busy years as the Danville home became the base for the enlarged family (plus pets!). In the 1980s following Bill’s retirement, Meum and he moved from Danville to Brockville where they began to travel extensively, sail and enjoy the family. Following a relocation to Toronto, Port Perry and then Bill’s subsequent death, Meum came back to Brockville which she loved. Meum was a devotee of the written word, the CBC, Liberals, Scotland, the New York Times crossword (in pen!) and the Montreal Canadiens. The family will fondly remember her immaculate handwritten notes containing the details of the latest political outrage, a travel destination or a newspaper clipping of interest. Like her Maw before her, Meum was a remarkable lady with a grand sense of humour and purpose and she will be sorely missed.

Funeral at St. Lawrence Anglican Church, 80 Pine Street, Brockville on Friday, August 16 at 11:00 am. Memorial service and interment in Danville, PQ to follow. Sincere thanks to the Royal Brock Retirement Residence for their compassionate care. In lieu of flowers, donations to the Ontario SPCA Leeds and Grenville Animal Centre, 800 Centennial Road, Brockville, ON L4A 2W3 would be much appreciated. Arrangements entrusted to Irvine Funeral Home and Chapel, 4 James Street East, Brockville. Send a condolence on the memory wall above or place a donation at https://ontariospca.ca/leedsgrenville/.
Read Less

We encourage you to share your most beloved memories of Miriam here, so that the family and other loved ones can always see it. You can upload cherished photographs, or share your favorite stories, and can even comment on those shared by others.

When we moved onto Prince Albert Street in Danville, your Mum was the first to arrive at the door to welcome us to the neighbourhood, bearing a delicious banana bread. I have many good memories of your mum.

Posted Aug 15, 2019 at 07:21am
Sincere condolences to the Rick family for the loss of Miriam,
She was kind to people and animals in her path...
Peter ODonnell
Comment Share
Share via:
SC

Posted Aug 14, 2019 at 10:28pm
My deepest condolences to the entire Rick family. I feel so blessed that my paths crossed with such an amazing woman. Rest in peace Meum.
Comment Share
Share via:
LM

Posted Aug 14, 2019 at 01:14pm
Our sincere condolences to John, Barb, Brucester, Ellen, Chuckie and the entire Rick Clan on the passing of Meum...our thoughts are with you at this difficult time.

Posted Aug 14, 2019 at 01:12pm
I am so sorry to hear of mrs ricks passing. I have fond memories of her guiding years. She had such patience. My thoughts are with the whole family at this time. Barb Clayton day
Comment Share
Share via: 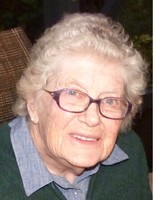