To share your memory on the wall of Mary Owens, sign in using one of the following options:

Provide comfort for the family of Mary Owens with a meaningful gesture of sympathy.

Family and friends are invited to pay their respects at Irvine Memorial Chapel, 2451 County Rd. 15, Maitland on Saturday, September 28 from 12 noon until 1 pm. A ceremony celebrating Mary's life will be held in the chapel at 1 pm. As expressions of sympathy, donations to the Parkinson's Society will be gratefully acknowledged. Send condolences on the memory wall above or place a donation using the link below.
Read Less

Posted Sep 21, 2019 at 05:32pm
Sending my love to everyone....so many good memories with Aunty Mary! From learning to dive in the pool, to Christmas in November and Easter egg hunts for everyone. Lots of fun family gatherings! I still have the hand painted Christmas ornaments.

I'm sorry I wont be able to come into town next weekend, but hugs for everyone

Posted Sep 18, 2019 at 09:36pm
To Bob, Betty Ann, Sandy and Mary Lou,
So sorry to hear of the passing of your mom...
To Keely, Korah, Katrina and many other grandchildren, great-grandchildren...
So very sorry for the loss of Nanny...
Our deepest condolences
R.I.P. Mary
Lucille Bernard, Alex Thomas
Patrick and Shawna-Leigh Doyle
Carleton Place, Ontario
Comment Share
Share via: 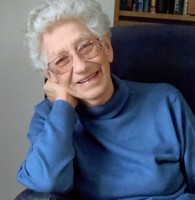