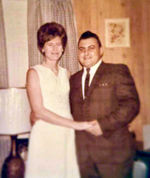 Passed away peacefully at the Brockville General Hospital, Charles Street Site on Thursday, April 25, 2019. Mary Elizabeth (Alcock) Brennan, at the age of 74 years. Beloved wife of the late James (Jim) Brennan. Dear mother of Nancy Serson and Jeannie Nichols (Peter). Will be missed by her grandchildren, Christopher "Boogey", Jennifer (Eric), Daniel, David "D.J." (Ashley), Kevin, and Marissa; and great-grandchildren, Zayden, Hunter, Lily, Hazel, Meadow and one on the way. Also survived by several cousins and many friends. Predeceased by her parents Inez and Ernest Alcock. Mary was a dedicated fan of the Toronto Maple Leafs, the Blue Jays and the Toronto Raptors. Her passions were knitting, her family and being "Granny" to everyone.

A celebration of Mary's life will be held at a later date. As expressions of sympathy, donations to the Brockville and District Hospital Palliative Care program will be gratefully acknowledged. Send condolences or make a donation online at www.irvinememorial.com.