To share your memory on the wall of Mary Brennan, sign in using one of the following options:

A celebration of Mary's life will be held at a later date. As expressions of sympathy, donations to the Brockville and District Hospital Palliative Care program will be gratefully acknowledged. Send condolences or make a donation online at www.irvinememorial.com.
Read Less

Receive notifications about information and event scheduling for Mary 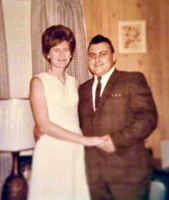