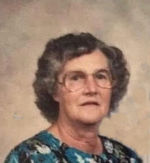 Passed away peacefully with her daughter holding her hand at the Brockville General Hospital on Thursday, March 11, 2021. Margaret Jean Isabel (Shaver) Jannack, in her 94th year. Wife of the late Alfred Jannack who predeceased her in 2006. Dear mother of Bruce Jannack and Diana Byron and her husband John. Fondly remembered by her grandchildren Vicky Jannack (Bob), John Yateman, and Jeffery Yateman (Dorthy). Also survived by six great grandchildren, two great great grandchildren, her sister-in-law Jessie Shaver and by her two fur babies Buddy and Maggie. Margaret was predeceased by her parents Frederick and Evelyn (Brebant) Shaver and by brothers Wallace and Donald Shaver and by her sister Eleanor Engelsdorfer.

Family and friends are invited to pay their respects at Irvine Funeral Home and Chapel, 4 James Street East, Brockville on Thursday, March 18, 2021 from 1 until 2 pm when a family celebration of Margaret's life will be held in the Chapel at 2 pm with Pastor Robert Lang officiating.

Covid protocols will be effect with a limited number of guests to be in attendance.

As expressions of sympathy, donations to the SPCA will be gratefully acknowledged.

Send condolences or share a special thought of Margaret on the Memory Wall above. Thank you.