To share your memory on the wall of Joyce Mehan, sign in using one of the following options:

Due to Covid-19 restrictions, a celebration of Joyce's life will be held at a later date.

Send messages of condolence or share a special thought of Joyce on the Memory Wall above.
Read Less

Receive notifications about information and event scheduling for Joyce

We encourage you to share your most beloved memories of Joyce here, so that the family and other loved ones can always see it. You can upload cherished photographs, or share your favorite stories, and can even comment on those shared by others.

Posted Apr 05, 2021 at 10:26am
To John and family of Joyce Mehan,
My deepest condolence in the loss of your mother.
Both Carol and I worked with her at BPH. She was a dedicated Head Nurse and cared deeply for her patients.
She was a wonderful person and will be missed.
John Shorey
Comment Share
Share via:
DC

Posted Apr 05, 2021 at 12:12am
John and Pam, and family, Sheila and I were very saddened to hear of your Mom's passing! I worked with your Mom when she was head nurse on 4a and what a beautiful person she was. We had many long talks, often about both of you and the grandkids. Many a laugh we shared - her sense-of -humour was contagious. Then she and John became neighbours of ours after I suggested she look at buying a home on our street; I assure you we didn't move to North Carolina to get away from Joyce - we would have been delighted to have taken her with us! You are in our thoughts and prayers.
Don & Sheila Cooper, Kingston.

Posted Apr 01, 2021 at 11:37pm
To Joyce Mehan’s family
We will remember Mrs Mehan’s wonderful smile and her kindness. We would like to offer our deepest Sympathy to the family
From the staff in pharmacy at downtown Shoppers Drug Mart
Comment Share
Share via:
MM

Posted Apr 01, 2021 at 08:32pm
Joyce will be sadly missed by her many friends at Wall Street United Church. She was always so elegant and cheery. I was hoping to have a cuppa with her once the pandemic was over, but it was not to be.
Comment Share
Share via:

Posted Apr 01, 2021 at 12:28pm
My deepest sympathy to you John , Pam and family in the loss of your Mom.
Joyce was my “ Head Nurse “ for awhile and she was a true joy to work with - a warm , caring lady with a super sense of humour . She often spoke of you , her children , with obvious love , pride and devotion . Thoughts and prayers as you go through this sad time .
Sherry and Danny Seed
Comment Share
Share via: 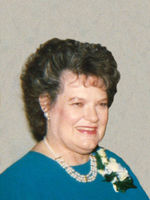