To share your memory on the wall of John Hare, sign in using one of the following options:

Born in Montreal on Dec. 11, 1924, Dad served in the Second World War and was very proud of this, demonstrating his pride each year on Remembrance Day. Very soon after the war he met and married Julie. They raised son Brian in LaSalle, QC. Son Jim came along 14 years later, at which time the family moved to Chateauguay, QC where he and Julie lived until he retired after many years in the printing business. Dad’s passion for his work and all the people he met along the way during his career lead him to great success and allowed him a very enjoyable retirement.

Dad enjoyed playing golf (had his only hole in one at 78 years old), and also tennis. He was very involved in Little League Baseball for 10 years, as part of the league executive and as an umpire. In 1990 Mom and Dad moved to Maitland/ eventually Brockville, once again living close to Brother Gil (and Margie). They began a new life and developed many new relationships over 17 years until Mom’s passing.

Since that time, Alena had slowly become a very special part of Dad’s life. They lived together for roughly 10 years, enjoying many good times together. During this time, Dad’s network of special friends continued to expand, including many members of Alena’s family.

Above all, Dad always cared very deeply for his family, and for that we are forever grateful. Thank you John, Dad, Grandpa.

As per our Dad’s wishes there will be no funeral service. A burial service celebrating his life will be held in Montreal in May. The family would like to thank the staff at the Brockville General Hospital for their care and compassion. As expressions of sympathy, donations in support of Huntingtons disease can be made at wehaveaface.org/canada and will be gratefully acknowledged (if you wish to have them send a notification to the family and you do not have their contact information, please, have it sent to the funeral home at admin@irvinememorial.com or 4 James Street East, Brockville ON, K6V 1J9). Condolences may be shared on the memory wall above.
Read Less

We encourage you to share your most beloved memories of John here, so that the family and other loved ones can always see it. You can upload cherished photographs, or share your favorite stories, and can even comment on those shared by others.

Posted Apr 03, 2020 at 06:29pm
Very sorry to hear of John's passing. He was good friend with his cousin (my dad) and I remember the many stories of their times together. Sincerest condolences to the entire family. Bruce and France McLeod
Comment Share
Share via:
N

Posted Feb 15, 2020 at 06:44pm
To the Hare family & Alena. We were so sorry to hear John has been taken to his next
life. He was a wonderful neighbor and good friend of ours for many years. We
always enjoyed our visits. John always welcomed us with a smile and a handshake.
Brian and John attended the Levy a few times together and fun times at the
Brockville Legion. We will always have fond memories. John will be missed by
all who were lucky enough to cross his path. Our deepest sympathy and prayers
go out to you at this time. 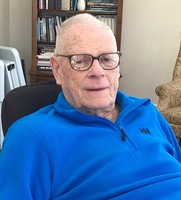