To share your memory on the wall of Helen Hall, sign in using one of the following options:

Passed away peacefully at the Brockville General Hospital, Charles Street Site on Friday, February 15, 2019. Helen Josephine (Hannah) Hall, at the age of 89 years. Wife of the late Floyd Hall and dear mother of Betty Hall. A... Read More
Hall, Helen

Passed away peacefully at the Brockville General Hospital, Charles Street Site on Friday, February 15, 2019. Helen Josephine (Hannah) Hall, at the age of 89 years. Wife of the late Floyd Hall and dear mother of Betty Hall. Also survived by one grandson, Jason Hall; a sister, Betty Guild (Stanley); a brother-in-law, Edward Hall; and several nieces, nephews, and cousins. Predeceased by her son, Joe Hall; brothers, Roy, Everet, Gerald, and Morris Hannah; a sister, Bernice Crowder; as well as by her parents Jennie and Clifford Hannah.

A graveside service will be held at Oakland Cemetery at a later date. Arrangements are entrusted with the Irvine Funeral Home and Chapel, 4 James Street East, Brockville, As expressions of sympathy, donations to the charity of your choice will be gratefully acknowledged. Send condolences or make a donation online at www.irvinememorial.com.
Read Less

Receive notifications about information and event scheduling for Helen

We encourage you to share your most beloved memories of Helen here, so that the family and other loved ones can always see it. You can upload cherished photographs, or share your favorite stories, and can even comment on those shared by others.

Posted Mar 06, 2019 at 06:21pm
Betty, I am so sorry for your loss. Keep the memories of your mom close to your heart to help you through this difficult time.
Comment Share
Share via:
SM

Posted Mar 01, 2019 at 01:33pm
Hi Betty
Sorry to hear about your Mom. I hope you are doing well. I’ve been thinking about you and miss you at “What’s for dinner?”
Sending lots of love, Sue 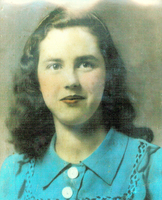