To share your memory on the wall of Guy Lortie, sign in using one of the following options:

Provide comfort for the family of Guy Lortie with a meaningful gesture of sympathy.

Guy was a loving father to his sons William and David, and a devoted husband to his wife of 66 years, Wilma. He was also a caring Christian who during his lifetime served in responsible positions in every church where he was a member. He was active in Baptist Mens Fellowships in Ontario and Nova Scotia in various capacities.

Guy often regretted the amount of time that he had to be away from family when he was on the road. However, he made up for that time during family vacations, particularly during summer camping, boating and fishing trips with his family, and on many family road trips. Those were happy and fulfilling times for all. Guy also possessed a natural artistic talent in oil painting and pastels and found time during his retirement years to produce many works that now grace the walls of his sons’ homes. He was a handyman who enjoyed working on all kinds of activities both indoors and out, and he instilled those same qualities in both his sons. He was very keen on helping others in any way that he could - no task was too big or small for him to undertake to assist someone in need. He maintained that same focus even in his waning years when his mobility and health were somewhat compromised.

Guy was predeceased by his parents Joseph and Alberta Lortie (Lanctôt) and his loving wife Wilma (Gibbons). He is survived by his sons William (Ginette) and David (Beth), his seven grandchildren and step-grandchildren, and his ten great-grandchildren.

A memorial service will be held at the McConnell Manor, 801 4th Street East, Cornwall on Wednesday, January 8, 2020 at 2:00 pm. Interment will take place in Cornwall in the Spring with arrangements entrusted to Irvine Funeral Home, Brockville. Condolences may be placed on the memory wall above.
Read Less

We encourage you to share your most beloved memories of Guy here, so that the family and other loved ones can always see it. You can upload cherished photographs, or share your favorite stories, and can even comment on those shared by others. 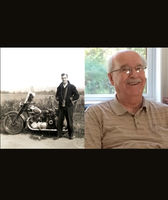