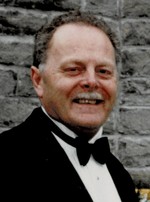 Frank Trevor Basten, 87, of Brockville, Ontario, passed peacefully February 26, 2022 in the care of the many amazing caregivers at St. Lawrence Lodge.

Frank is survived by his wife of 64 years, June, daughter Stacey (Paul) Pauzé, son Roger (Kim) Basten, grandchildren, Danika and Dawson Pauzé, and Ryan and Nicole Basten. Frank was a loving husband, father, granddad and a great friend to many. His handsome face and gentle British accent calling everyone by his own special term of endearment – Darling, Precious, Princess, Sunshine - were the highlight for so many surrounding him.

Frank started his career as a Mechanic in the Royal Air Force (U.K.) where he met June. After he and June moved to Canada, he worked as a Manufacturing Engineer at Black & Decker for over 25 years and continued to work as a cabinet maker. He loved his cars and motorcycles, spent many a day tinkering and showing his Jaguars, and attending car shows.

Frank had many accomplishments, including designing and patenting of the Black & Decker's Workmate, the "Road Toad” (the motorcycle trailer). He also built his dream home in Brockville which he lovingly called “Greystones”. He built most of the furniture in the home with great skill and meticulous attention to detail. In retirement, Frank enjoyed his property and going for walks with his dog, Lassie, and showing his Jaguars at car shows in the surrounding area. His talents and accomplishments will be forever remembered by all of his family. He will be fondly remembered by so many.

A special thank you to all the amazing caregivers at the St. Lawrence Lodge in Brockville who took such fantastic care of Frank over the last two years. He felt like he was in Heaven surrounded by their love and affection, beautiful faces, and great care. We would also like to thank Dr. Mansworth for his long term care, friendship, and kindness.

A celebration of life will be held at a later date.

Donations may be made in Frank's name to the Alzheimer’s Society of Lanark, Leeds and Grenville or to The Ontario Lung Association below.

Send messages of condolence or share a special thought of Frank on the memory Wall above.