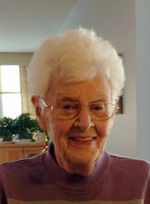 Evelyn was born on October 18, 1922 in Summerside, PEI, eldest and only daughter of Ernest and Minnie Walker. She lived there until attending Acadia University in Wolfville, Nova Scotia where she obtained a Bachelor of Home Economics. She later moved to Montreal where she met her husband. They moved to Sackville, New Brunswick where they began raising their family. While the children were small they moved to Ottawa and later Manotick. Evelyn was a Girl Guide leader (Life Member), an avid traveller, bridge player and volunteer. Special thanks to the care workers who supported her and to Jun, of Robertson House, who delivered her dinners for years. The family is also grateful to the staff, nurses and doctors at Brockville General Hospital, who looked after her in her final few days. She was an inspiration to all who met her.

Family and friends will gather for a celebration of life for Evelyn at the Irvine Memorial Chapel at Roselawn Memorial Gardens, 2451 Maitland Merrickville Rd. just north of Highway 401. The celebration will be held on Saturday, July 27th at 1:00 pm. There will be a memorial service in the chapel followed by an interment and short committal service. Refreshments will be served following the committal service.