To share your memory on the wall of Evelena Harper-Latimer, sign in using one of the following options:

Provide comfort for the family of Evelena Harper-Latimer with a meaningful gesture of sympathy.

Family and friends may pay their respects at Irvine Funeral Home, 4 James St. E. Brockville on Friday, January 17th from 9-10 am. A celebration of Evelena's life will follow in chapel at 10 am. In memory of Evelena, donations to Sherwood Park Manor or the Brockville and District Hospital Foundation will be gratefully acknowledged. Send a condolence on the memory wall above or place a donation using the links below.
Read Less

Donations are being accepted for:
BROCKVILLE AND DISTRICT HOSPITAL FOUNDATION SHERWOOD PARK MANOR

We encourage you to share your most beloved memories of Evelena here, so that the family and other loved ones can always see it. You can upload cherished photographs, or share your favorite stories, and can even comment on those shared by others.

Posted Jan 17, 2020 at 04:08pm
Gail Howe
My sincere condolence goes out to the Harper & Latimer family at this time. I remember Evelena from the Hallecks Rd. years ago,we had lots of fun times together.She was a very nice lady & a very nice neighbour to my mom on Wellington St. RIP Evelena
Comment Share
Share via:
DH

Posted Jan 17, 2020 at 08:58am
To the Harper family, my deepest condolences. Will always remember your mom sitting on the porch or back deck talking about old times. Could listen to her stories all day, and loved her very much!♥️♥️
Comment Share
Share via:
JP

Posted Jan 15, 2020 at 08:26pm
Has been many years since I have seen her but spent many years years around her. She was lively and fun going. So sorry to the family
Comment Share
Share via:
GB 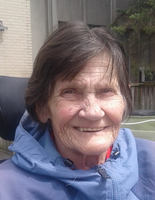