To share your memory on the wall of Elizabeth (Libby) Lockett, sign in using one of the following options:

Elizabeth Margaret (Libby) Lockett passed away at the St. Lawrence Lodge, Brockville, on Thursday, March 11, 2021, at the age of 85 years. Libby is survived by her brother Peter Lockett (Marylee); her niece Rebecca Lockett; her nephew Michael Lockett (Jane) and by her two great nephews Cole and Theo Lockett. She will be sadly missed by her family and many friends and in particular, her dear friend Donna Tweddell, who Libby referred to as her sister.

Predeceased by her parents Isa and Edgar Lockett and by her brother Donald Lockett.

Libby was raised in Kingston, Ontario where her family owned and operated Lockett’s Limited, a shoe, camera and leather goods store on Wellington Street. Libby and her Father shared a love for photography and cameras.

Libby became a professional photographer working initially in Kingston at Redmond and Higgs then relocating to Brockville to work for Lawrence Redmond Studios.

Subsequently, as manager of the Brockville Downtown Business Improvement Area, Libby had the opportunity to participate in the Provincial organization and was elected to the board of the Ontario Association of DBIA’s, an achievement she was especially proud.

Libby loved interacting with people and her retail sales positions at Dailey Leather Goods and the Hallmark Store in the Thousand Islands Mall provided the opportunity for her to share her expertise and wonderful sense of humour and quick wit.

Libby completed her career as a receptionist/assistant in accounting firms, including Beverley J. Duncan, CPA, CA, where she was a dedicated and loyal colleague and friend.

A long-time member of the First Baptist Church, she was a caring and compassionate person who was always ready to lend a helping hand.

In 1981, Libby was one of the founding members of the Brockville Women’s Network. She participated on several committees over the years and was named an honourary member.

A private family graveside service and interment will take place in the family lot at the Cataraqui Cemetery, Kingston at a later date.

As expressions of sympathy, donations to Parkinson Canada will be gratefully acknowledged.

Send condolences or share a special thought of Libby on the Memory Wall above. Thank you.
Read Less

Receive notifications about information and event scheduling for Elizabeth (Libby)

We encourage you to share your most beloved memories of Elizabeth (Libby) here, so that the family and other loved ones can always see it. You can upload cherished photographs, or share your favorite stories, and can even comment on those shared by others.

Posted Mar 28, 2021 at 05:27am
Libby was more than just a dear friend to us – we considered her to be part of our family. We treasured our time with her, and we looked forward to visiting her on our annual trips back to Brockville. Just before we moved to Australia, she shared her talents by taking photos of us with close friends and at our special spots around town. A thoughtful gift that still brings back fond memories. She will be missed but also celebrated as we remember all of her contributions to so many in the community.
Shireen, Tom & Sarah

Posted Mar 16, 2021 at 10:46am
So sad to hear of Libby's passing.
Libby sounded like the kind of person that people would be blessed to know.
May her family and friends take strength in God's comfort and peace during and after this very difficult time.
God Bless,
Dave
Comment Share
Share via:
ES

Posted Mar 16, 2021 at 08:23am
Libby had a fun side . She loved music and singing. In her younger years , she sang in Choirs, and loved going to concerts at the Art Centre. She had an extensive collection of tapes and CDs, and never went on a road trip without a plentiful supply of them.

Libby had played baseball in Kingston and loved sports. She followed all sports events on TV, and was very knowledgeable of players and statistics. 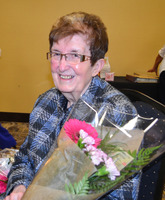