To share your memory on the wall of Eilean Koen, sign in using one of the following options:

As expressions of sympathy, donations to the Brockville and District Hospital Palliative Care will be gratefully acknowledged. Send condolences or make a donation online at www.irvinememorial.com.
Read Less

Receive notifications about information and event scheduling for Eilean

We encourage you to share your most beloved memories of Eilean here, so that the family and other loved ones can always see it. You can upload cherished photographs, or share your favorite stories, and can even comment on those shared by others.

Posted Mar 04, 2019 at 08:59am
Kate and I send our condolences to Donnie, Shane and Sandra. Aunt Eileen was a very kind lady. I remember some summer holidays with Shane and family gatherings. She was a very welcoming aunt. My mother was always very fond of her.

Posted Mar 03, 2019 at 07:22pm
Sandra, Shane, and Donnie;
You know our thoughts are with all of you and your families at this time. It was an honour to know your Mom over the years. Our trip to Vegas will always be one of my best memories of Eilean. She so enjoyed all of our crazy adventures during that trip, including a very special dance show!! Hug to all of you.
Comment Share
Share via:
JH

Posted Mar 03, 2019 at 06:03pm
Our deepest sympathy to you Donnie, Shane & Sandra on the loss of your mother. Our thoughts are with you & your family at this difficult time.
Jim & Linda
Comment Share
Share via:
RA

Posted Mar 03, 2019 at 12:27pm
In loving memory of Eilean Birtch Koen my loving and happy aunt! Our sympathies to Donnie, Shane, Sandra and families. 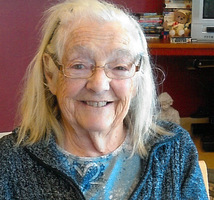