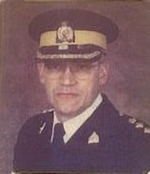 Denis passed away in Brockville after a brief illness. He leaves his wife Eileen (Young) Ling in their 62nd year marriage; two sons Steven of Victoria BC, Jeffrey and his wife Danielle, nee Saunders; two grandsons Andrew and Stephen and one great-granddaughter Sarah, all of Belleville, Ontario. Denis joined the RCMP in 1954, married Eileen in 1959 and the 32 year career made possible to live together in all three main regions of Canada, out West in Saskatchewan, central Canada in Quebec and Ontario and in the Maritimes, New Brunswick.

Denis has been cremated and arrangements are being made for a private service in the RCMP Chapel in Regina, followed by interment in the nearby "Depot" Cemetery.

Send condolences on the Memory Wall above. Thank you.