To share your memory on the wall of Demetria Tsibidis, sign in using one of the following options:

Family and friends are invited to pay their respects at Irvine Funeral Home and Chapel, 4 James Street East, Brockville on Wednesday, April 10th from 6-8 pm. Funeral services for Demetria will be held on Thursday, April 11th at 11 am at the Hellenic Community Greek Orthodox Church, 206 Perth Street, Brockville. Interment will be at St. Francis Xavier Cemetery. As expressions of sympathy, donations to the Hellenic Community Greek Orthodox Church or St. Lawrence Lodge will be gratefully acknowledged. Send condolences or make a donation online at www.irvinememorial.com.
Read Less

Receive notifications about information and event scheduling for Demetria

We encourage you to share your most beloved memories of Demetria here, so that the family and other loved ones can always see it. You can upload cherished photographs, or share your favorite stories, and can even comment on those shared by others. 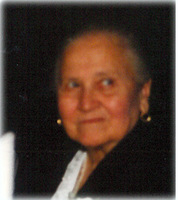