To share your memory on the wall of David Yocum, sign in using one of the following options:

Family and friends are invited to pay their respects at the Irvine Memorial Chapel at Roselawn, 2451 County Rd. 15, Maitland on Tuesday, July 2, 2019 from 11 am to 1 pm with the service commencing at 1 pm in the Chapel. Interment and reception will follow.

As expressions of sympathy donations to the Heart and Stroke Foundation or charity of your choice will be gratefully acknowledged. Send condolences via the Memory Wall above or make a donation at the bottom of the services page below.
Read Less

Receive notifications about information and event scheduling for David

We encourage you to share your most beloved memories of David here, so that the family and other loved ones can always see it. You can upload cherished photographs, or share your favorite stories, and can even comment on those shared by others.

Posted Jul 11, 2019 at 10:15pm
Sheila so sorry for your loss
I just heard
He was a great friend will be missed
Comment Share
Share via:
HF

Posted Jun 30, 2019 at 07:21am
Dear Sheila and family.
Please accept my sincere condolences on your loss. My thoughts and prayers are with you.
. 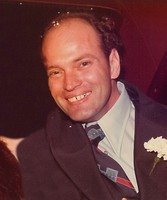