To share your memory on the wall of Arthur Bycroft, sign in using one of the following options:

Provide comfort for the family of Arthur Bycroft with a meaningful gesture of sympathy.

It is with great sadness that we announce the passing on May 19, 2020 of Arthur Bycroft, in his 101st year.
One of the few surviving members of “The Greatest Generation”, Art was a World War II veteran. His hearing was permanently damaged during the battle of Ortona, when Canadian troops were victorious against those of Nazi Germany.

Art’s hearing impairment did not prevent him from leading a very successful life. The last several years were at Delmanor Retirement Residence in Oakville, where he was adored by both staff and residents. His prowess at euchre was legendary and his absence at the table will be keenly felt.

Due to the COVID-19 restrictions there will not be a funeral visitation or service at this time. A memorial service to celebrate his life will be held at a later date.

Please send a message of condolence or share a special thought of Art on the Memory Wall above. Thank you.

Donations in memory of Art may be directed to the Royal Canadian Legion Poppy Fund, which would be gratefully appreciated.
Read Less

Receive notifications about information and event scheduling for Arthur

We encourage you to share your most beloved memories of Arthur here, so that the family and other loved ones can always see it. You can upload cherished photographs, or share your favorite stories, and can even comment on those shared by others.

Craig Snelson sent flowers to the family of Arthur Bycroft.
Show you care by sending flowers

Posted May 23, 2020 at 07:02am
Dear Carla and family,
We were saddened to hear of your father's passing. Please accept our sincere condolences. We still remember meeting your mom and dad while we were in Brantford and have a lovely picture of the three of you.

Posted May 22, 2020 at 04:27pm
Dear Carla and family- my sincere and deepest sympathy to you at your Dad’s passing. He was such a fine gentleman and I will treasure all the memories I have of him as well as your Mom. I hope your memories bring you comfort. Love and hugs to you.🥰🌸
Comment Share
Share via:
LJ

Posted May 22, 2020 at 03:18pm
Carla and family,
Wishing you all, peace and comfort in this time of your loss. May you find comfort in your memories. Brian

Posted May 22, 2020 at 01:22pm
Dear Carla & family, so sorry to hear of Uncle Art's passing, he was truly a treasure & will be greatly missed. Of all my uncles he was always my favourite. It's not surprising to read that he was so well thought of by staff & residents at Delmanor Retirement Residence because he was well thought of & respected by many during his years living in Brockville.
Linda Johnson XO
Comment Share
Share via: 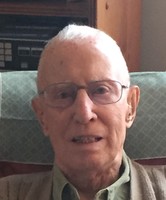