To share your memory on the wall of Anne Jago, sign in using one of the following options:

Passed away peacefully in accordance with her wishes at the Brockville General Hospital, Charles Street Site on Sunday, March 29, 2020. She was pre-deceased by her parents, Arthur Clarence Burton and Edith Ethel Burton (Fryer), her sister Mary Inglis (the late Lt. Col Grahame Inglis) and her beloved husband Ralph Craig Jago. She is survived by her children Philip (Diane) Jago and Bruce (Mary) Jago. Fondly and forever remembered by her grandchildren Jennifer D’Aoust, Nicola Jago-McClymont (Michael), Andrew Jago , Caitlin Jago and Emily Jago. Also survived by her great grandchildren Kailey D’Aoust, Kayla McClymont and one more McClymont on the way!

Anne was born in Belleville, Ontario and graduated Grade 13 at the age of 16 from the Belleville District Collegiate Institute and Vocational School, worked in a number of Belleville-area enterprises and subsequently passed the necessary examinations from Queens University to become an Associate of the Canadian Bankers' Association. She was swept off her feet by Ralph, a native of North Gower, who was a dashing war veteran and recently-commissioned Lieutenant in the 9th Anti-Tank Regiment in addition to his then day job at Stewart Warner. She and Ralph were married at St. Thomas Anglican Church in Belleville on October 3, 1953, taking up residence first in Prescott and subsequently the Brockville area. She worked initially for the Bank of Montreal in Prescott and subsequently for the Montreal Trust Company in Brockville, retiring from the latter as Manager of the Savings Department after 35-years of loyal and dedicated service.
Anne was a selfless individual and a tireless worker, values which she imparted to her family. Aside from her financial career, she was a wonderful homemaker and mother, and would think nothing of standing hours in the kitchen preserving as many as 100 quarts of tomatoes or other such vegetables produced by Ralph in their huge family garden.

In later years, she became a tireless volunteer with the Women’s Auxiliary of the Brockville General Hospital, the Anglican Church Women of both Trinity Anglican Church and Saint Lawrence Anglican Church, the Royal Canadian Legion and the Salvation Army, gladly helping to sell poppies for Remembrance Day and collecting donations for the Kettle Fund.

Throughout her life she maintained a fierce interest in the academic and career pursuits of her children, grandchildren and great grandchildren.

The family wishes to express our sincerest thanks to the wonderful, devoted and dedicated staff of the Brockville General Hospital who made Anne’s last days as comfortable as possible in the midst of this current pandemic.

As expressions of sympathy, donations to the Royal Canadian Legion Poppy Fund or the Women’s Auxiliary of the Brockville General Hospital will be gratefully acknowledged. See details below.

In accordance with Anne’s wishes, cremation will be followed sometime later with a private, graveside internment alongside Ralph at Holy Trinity Anglican Cemetery, North Gower, Ontario.

Please take a moment to send a message of condolence to the family or share a special thought of Anne on the Memory Wall above.
Read Less

Receive notifications about information and event scheduling for Anne

We encourage you to share your most beloved memories of Anne here, so that the family and other loved ones can always see it. You can upload cherished photographs, or share your favorite stories, and can even comment on those shared by others.

Posted Apr 23, 2020 at 12:42pm
Please accept my sincere condolences (albeit late) on the passing of your family member Anne. Anne was such a pleasant person to talk to , she always had a smile on her face when she came to pick up keys for her volunteer work here at BGH. From what I read here, it seems she lived a good happy life and I am happy to hear that. God bless.
Comment Share
Share via:
DC

Posted Apr 16, 2020 at 02:35am
Philip and Bruce, and Family, Sheila and I were very saddened to hear of your Mom's recent passing! I knew her more through my association with your Dad in real estate and Probus, but knew her as a lovely Lady with a good sense-of-humour!
May you be comforted by the wonderful memories you shared.
Don and Sheila Cooper, Kingston.
Comment Share
Share via:
DK

Posted Apr 05, 2020 at 01:15pm
My sympathy to Anne’s family. I worked in the constituency office of the late Gord Brown MP and had many enjoyable conversations with Anne over the years. My most vivid memory was the joy on her face when she got her new hearing device.
Comment Share
Share via:
TB

Posted Apr 04, 2020 at 06:49pm
Philip, Diane, Bruce, Mary and families:
I first met your mother at the women's quilting group of the former Trinity Anglican Church in Brockville. I spent many hours chatting with her and the other quilters one afternoon a week. I attended and remember your father's funeral at the St. Lawrence Church and continued to chat with Anne as she was able to return to church and was sitting in the pews on Sunday morning. Anne helped with the social hour after the church service in the final weeks of her life. I am saddened by the loss of your mum as
she seemed to be holding up well. She certainly had a full and meaningful life and will be greatly missed by the church women. You have our deepest sympathy. 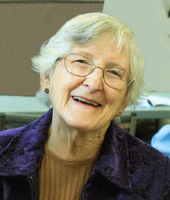